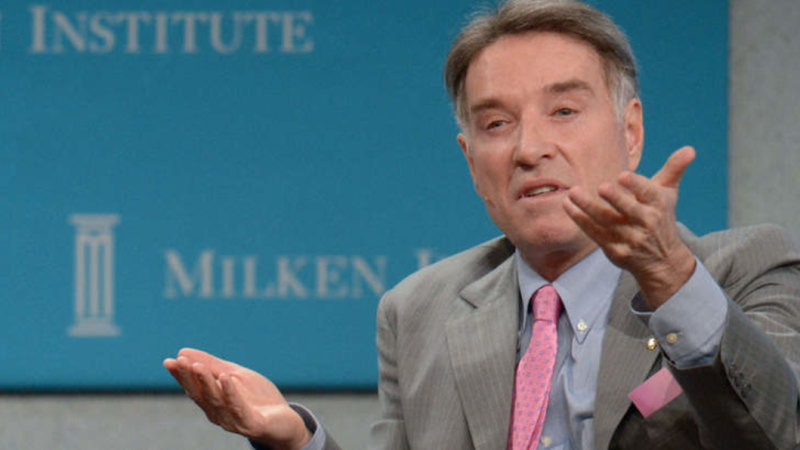 However, virtually all of his wealth evaporated, leaving him $1.2 Billion in debt to his creditors.

He once famously told Mexico’s Carlos Slim to watch out, as he was poised to surpass him as the world’s wealthiest person. Slim had faded ninth on the list, Batista to oblivion.

He blames the volatile stock market for his demise. However, Batista is trying for a comeback.

Today, if I could go back in time, I would not have resorted to the stock market. I would have a structured private-equity firm that would allow me to create from scratch and develop over at least 10 years each company. And they would all remain private until I was sure that it was time to go public.

Walking down a busy street in Rio de Janeiro one recent afternoon, we bumped into the Brazilian who is best known for losing $35 billion in a single year. After initially trying to deflect questions, he begrudgingly invited us along for a lunch that lasted two hours.

The man, of course, is Eike Batista, who once famously told Mexico’s Carlos Slim to watch out because, he said, he was poised to surpass him as the world’s wealthiest person. Slim has since faded to ninth on the list, Batista to oblivion. Now, he’s staging a comeback. Or trying to, at least. He’s also got lots of ideas for a man on the hot seat right now that he sees as something of a kindred spirit, Tesla CEO Elon Musk, and he’s quick to spew criticism at those he feels did in his empire.

Batista sat at the head of the table at one of his favorite Japanese restaurants in Rio, holding court and quizzing companions about Brazil’s ongoing oil bonanza while he scribbled calculations on a place mat. Pinned to his black sport coat was a golden sun, the logo of his erstwhile commodities empire that once made him the world’s eighth-richest person, and a household name in Brazil.

Batista sat at the head of the table at one of his favorite Japanese restaurants in Rio, holding court and quizzing companions about Brazil’s ongoing oil bonanza while he scribbled calculations on a placemat. Pinned to his black sport coat was a golden sun, the logo of his erstwhile commodities empire that once made him the world’s eighth-richest person, and a household name in Brazil.

Other former ventures are all humming along under foreign ownership, and remain a source of pride. Then a slight frown came across his face. “Except the oil.”

He was referring to OGX, which went bust under a mountain of debt after an unsuccessful exploration campaign. He blames President Luiz Inacio Lula da Silva for succumbing to a bout of resource nationalism, leaving only shallow-water scraps for him. Then, without missing a beat, he drew parallels to an acquaintance who’s in the kind of tight spot he knows too well.

“Elon Musk is suffering from this right now,” he said.

Like OGX before it, Musk built Tesla on the premise of greater sales than were delivered, and the failure sent shares tumbling. Terms like “distressed credit” and “restructuring” entered the conversation. It’s the biggest decliner in the Nasdaq 100 Index this year.

While differences between the men are glaring – Musk wants his electric cars to break the world’s fossil fuel addiction – the sudden downfall of Batista’s oil company offers a cautionary tale for Tesla investors.

Both have attacked short sellers with caustic tweets and made market-moving announcements on social media, then came under scrutiny from regulators for doing so. (Brazil’s securities commission this week banned Batista from running publicly-traded companies for seven years and slapped him with a 536-million-real ($195 million) fine.) They also regretted having taken their companies public once markets turned against them, and suffered high-profile staff departures.

The two have a personal relationship. In 2008 Musk travelled to Rio during another difficult moment, Batista said. A failed rocket launch had put Musk’s space program in doubt. They also met at Tesla’s factory in California, and Musk returned to Rio in 2014 for the World Cup where Batista assisted with his social agenda. “I helped him to go to some parties.”

OGX still exists under a different name as a minor producer, not the giant Batista envisioned. Tesla, too, risks being relegated to a niche player amid growing competition from established car makers who are flooding the market with new models.

Batista’s big concern for the company is the quality – or lack-there-of, he says – of the interior of Tesla cars. It’s an unusual perspective. Not even the most bearish Tesla bears tend to dwell much on the seats.

“You can choose a Mercedes, Audi, or Jaguar that are cheaper than his SUVs, and you sit in there and see the interior; you can’t compete!” said Batista, a former speedboat racer and car buff who displayed a Lamborghini in his living room until police seized it. “If you don’t correct this, you fall behind.”

Tesla is preparing a revamp of its Model S sedan to include seats from a higher-end model and a longer range battery, CNBC reported Thursday, citing unidentified current and former employees.

Batista doesn’t see Tesla bringing down Musk’s wider group of companies the way OGX sank his, even if the car maker doesn’t endure. In any case, Musk has already altered the course of history by forcing the wider auto industry to produce electric cars.

“He provoked a beautiful and massive move toward change,” Batista said, and then made a comparison to himself. “We are perfectionists, we are nation-builders.”

The conversation continued the next day at his office, a more modest space than he occupied in his heyday, but still offering a view of Rio’s iconic Sugarloaf mountain and decorated by trophies from the past. A surfboard once ridden by Gabriel Medina, Brazil’s two-time world champion, rested in a corner. A title belt given to him by a mixed martial arts fighter hung on his wall, and a coffee table featured a pair of samurai swords that were also a gift.

The man who once regularly graced Brazil’s front pages declined to have his photo taken.

He played videos showcasing the companies he once owned, then spoke about the 15 “unicorns” he’s “breeding in my garage” that will restore him to prominence. One plan entails producing millions of tons of calcium phosphate to sequester carbon emissions from power plant stacks and car engines. Another is toothpaste that regenerates enamel, though the tubes he passed around the conference table were for now filled with water.

Batista says he’s looking forward, and is untroubled by the past.

“The difficulty is for people to understand that my relation to money is very different. I didn’t mind breaking my empire,” Batista said, adding that he quickly sold his companies on the cheap. “You can’t let projects of that scale stop; if it stops for 2, 3, 4 years, sometimes you can’t catch up.”

20 Best War Movies on Netflix You Must Watch!